Rachael Lutes was a core member of CCDT for seven years, joining the company at just eleven years of age. She masterfully performed numerous works by a multitude of CCDT's early choreographers, originating roles in seminal works such as Artistic Director Deborah Lundmark's Ceremony of Carols (1988), and Carol Anderson's Garden (1989). Rachael performed in the inaugural WINTERSONG - dances for a sacred season at Premiere Dance Theatre (now Fleck Dance Theatre) in 1988, and embarked on CCDT's first international tour to the People's Republic of China in 1990.

Currently the Head of drama and dance at Mississauga's Cawthra Park Secondary School, Rachael shares how her experiences at CCDT shaped her career as a longstanding, passionate, and influential, dance educator in the GTA.

After a serious gymnastics injury I needed to find a new physical outlet. I opened the phone book and saw an advertisement for CCDT, gave them a call and attended my first dance class at 11 years old. Walking into the studios at TDT [CCDT's then-home] was one of the scariest things I have ever done in my life but also one of the most rewarding. I was in the company for seven years and then as a teacher for another nineteen years. At CCDT I found my love for teaching and some amazing friendships that have lasted a lifetime.

Rachael Lutes, second from the right in the turquoise jacket, with members of the company, guest artists, and Co-Founding Directors Deborah Lundmark and Michael deConinck Smith on the Great Wall during CCDT's 1990 three-week tour to the People's Republic of China.

After leaving CCDT I completed my Bachelor of Fine Arts degree at York University. Here I was able to further my training with many of the teachers that I was already working with at CCDT. Holly Small, Donna Krasnow, Claire Wooten, Carol Anderson to name a few. After York University I then continued my studies at The University of Western Ontario where I completed my Bachelor of Education.

I began my teaching career with the TDSB and my very first position was in a Kindergarten class. People would ask me if I missed performing and I would say, "I perform every single day in front of 23 little people and I love it." Soon after, I began working at Claude Watson School for the Arts where I taught dance to students in grades 5 to 8. Classes of 30 students, not all of whom were interested in dance in a gymnasium. It was a challenge but also very exciting to be in a school where students were engaged in the arts every day.

After five years at Claude Watson I moved school boards and began working at Cawthra Park SS in Mississauga. I have been at Cawthra now for 15 years and am the Head of the Drama and Dance Departments. I have also really enjoyed teaching the Additional Qualification courses in dance for York University's continuing education program. I love working with teachers who are committed to bringing arts education to their students. 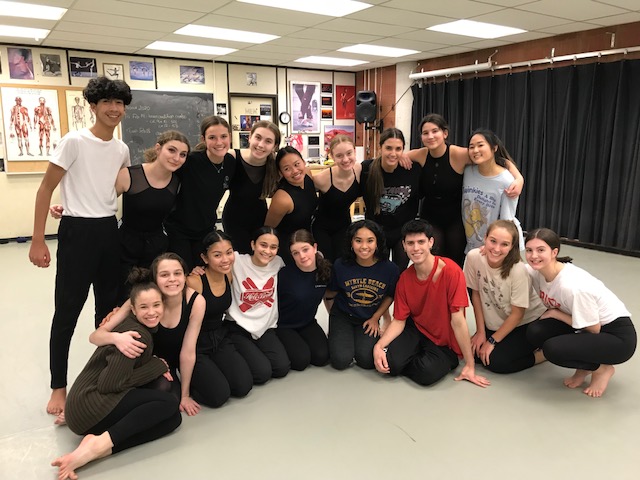 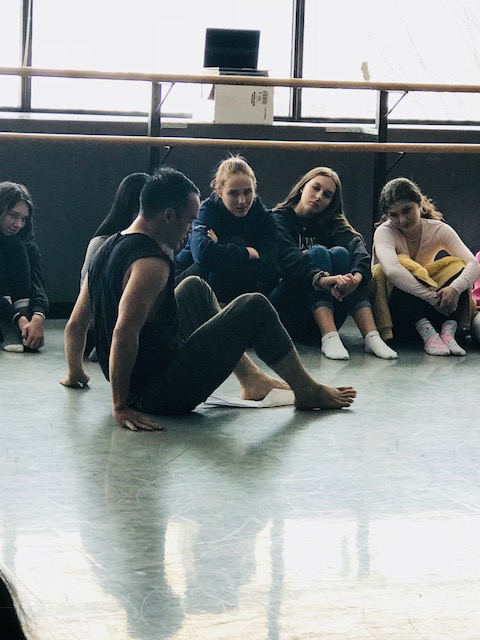 As Head of Dance, Rachael brings in many guest artists to enrich the experiences of her Cawthra students, including Cawthra graduates Scott McCabe and David Norsworthy (also a CCDT alumnus), pictured above.

Perseverance. I learned the value of getting back up when you fail, trying again and again, and never giving up when the going was tough. I learned the incredible feeling of reaching your goals when the road to get there was not an easy one. Perseverance continues to serve me well as I continue to advocate for arts education in these uncertain times.

I love attending CCDT performances and watching pieces that I was the original cast in. I will never forget learning Nine Person Precision Ball Passing [choreographed by Charles Moulton] with Peggy Baker. She taught us that incredible puzzle that will forever be in my brain. Similarly, Nowell Sing We by Carol Anderson. I have students who were recently in the 2019 WinterSong performance and we met in the hallway the next day and began singing sections of the music and dancing together.

Just go for it. Jump right in and see what happens. You just might learn something new about yourself and meet some incredible people along the way. Even if you are unsure about pursuing dance at the post secondary level, the skills that you will learn at CCDT will be with you for the rest of your life. No matter where you go or what you do. If you decide to dance you will have amazing connections to the dance community that you will be able to draw on for support. If you decide to go in a different direction, dance has taught you to be a creative problem solver, a collaborator, someone who can manage their time well, someone who can accept feedback, perseverance and someone who knows how to set goals and go after them.